Free as a bird: Reko Rennie unleashes his wings in Barangaroo

In As The Crow Flies, his vast public art project now open in Barangaroo, artist Reko Rennie looks at the site’s complex history as a meeting place

As a disgruntled young man growing up in inner city Melbourne in the 1980s, Reko Rennie turned to graffiti. Tagging under the cover of darkness became an important form of expression for an Aboriginal boy who says he might have been “locked up” had he not discovered art.

Today Rennie, 43, is one of Australia’s most important indigenous artists, whose work graces the walls of everywhere from the National Gallery of Australia to the Art Gallery of New South Wales. This year, his major new video work OA_RR, funded with a $90,000 Australia Council fellowship and featuring a score by Nick Cave and the Badseeds, is showing at the Venice Biennale.

As in the past, Rennie still paints public spaces. But there’s a difference: no longer done furtively, as in his graffiti days, major buildings now vie for his art. In October, Rennie unveiled As the Crow Flies at Barangaroo, a vast 1,500 square-metre site specific work commissioned by Lendlease.

“I’ve come from the streets, my work has come from the streets, and I always will work in the streets,” says Rennie. Behind him, on a giant construction wall that sits amid Baraganroo’s towers, are hundreds of large neon pink feathers set against a pop of cobalt blue background. Rennie believes public art is critical to society, “opening up a demographic that isn’t limited to the contemporary art clientele.”

Born in the suburb of Footscray in 1974 to a mother who worked as a clerk and an artist father, Rennie was encouraged by his parents to enter journalism. Influenced by his heritage as part of the Kamilaroi nation, who originally hail from present-day New South Wales, Rennie wanted to present a more positive Indigenous narrative than is usually seen in Australia, using words as his medium. 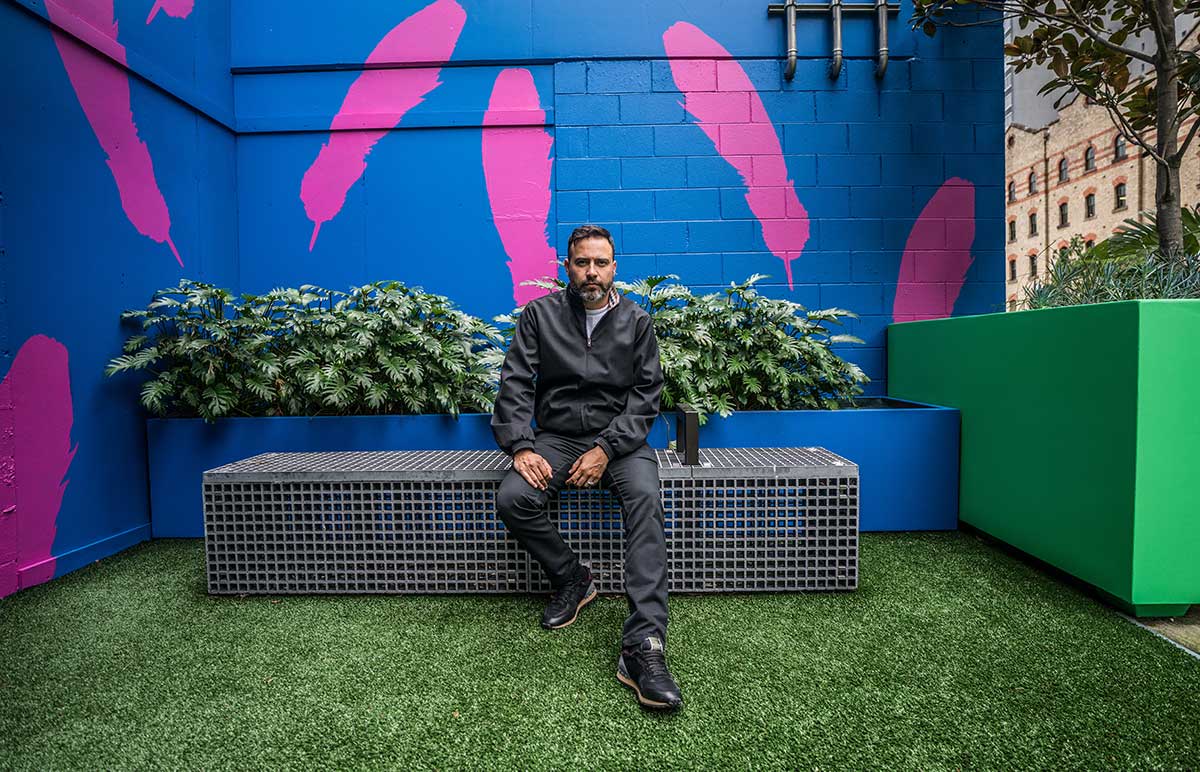 Yet he now sees himself as “quite naïve to think I would have any power to change the way it was perceived. Negative viewpoints, crime, sex – they sell papers. Good news stories on Aboriginal communities don’t.”

In 2009, having never been to art school and frustrated by the limitations of the media, Rennie left a decade-long career and a job at The Age newspaper to pursue his passion, bolstered by an Australia Council residency at the Cité Internationale des Artes in Paris.

Art, he believes, has given him a stronger voice than ever: “I’ve got more power to inform, raise awareness and be critical and say something about my identity or Aboriginal Australia than I ever did as a journalist and I have more platforms to do it on.”

Central to Rennie’s work is juxtaposing Indigenous symbols with an urban aesthetic inspired by the likes of Andy Warhol, the pop art movement, and abstraction. His choices reflect his own background and experiences growing up Aboriginal in the inner city.

“I can’t return and redo traditional [Indigenous] practice because I’m from an urban environment and not initiated. But I can use symbols in a contemporary context to bridge that culture gap and make a statement about it,” he reasons.

Works such as OA_RR and Always was, always will be, a highly visible fluorescent pink mural painted onto the T2 building in Sydney’s Taylor Square, often feature the traditional geometric diamond pattern of the Kamilaroi people. Bright colours provide a contemporary palate – and, crucially, draw attention in a concrete environment.

That was an important consideration for an artwork as large as As the Crow Flies, which needed to fizz against the high-rises and historic buildings of Barangaroo. But the high contrast colours have a larger meaning, too. Rennie wants to combat stereotypes of Indigenous art and culture “being ochre coloured and a mono culture.” 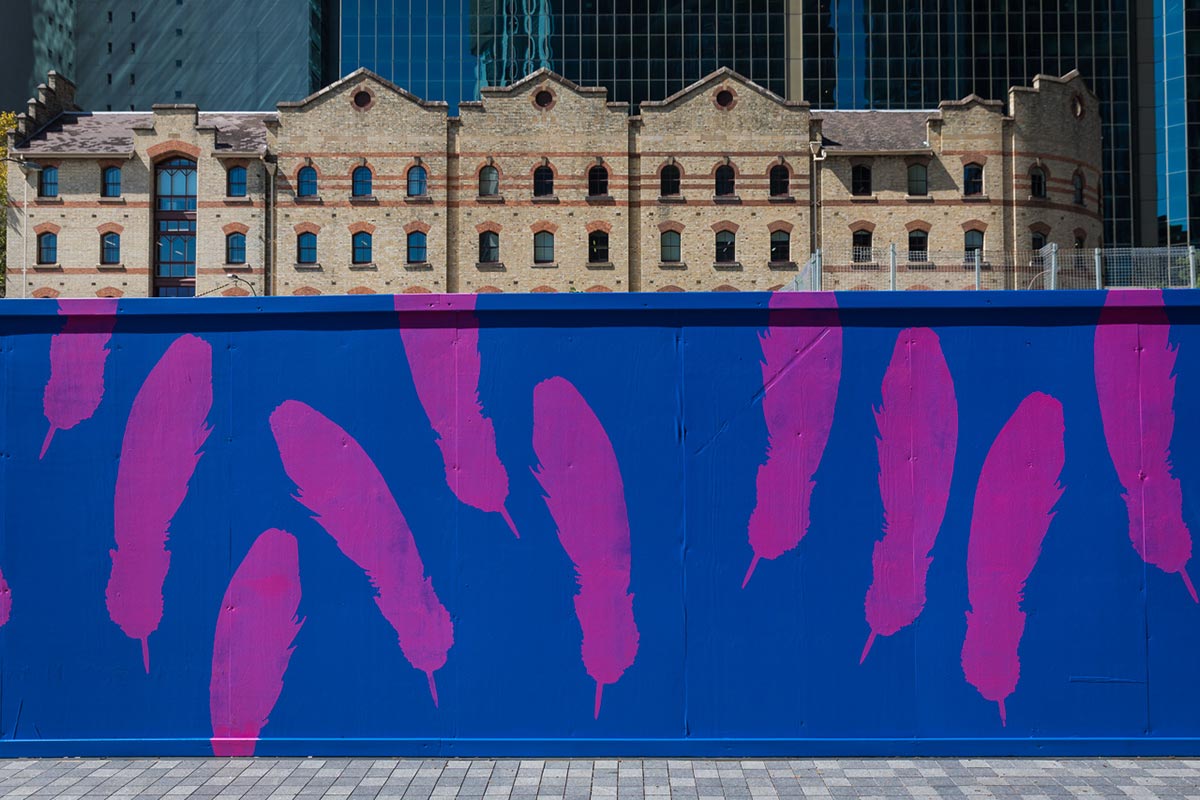 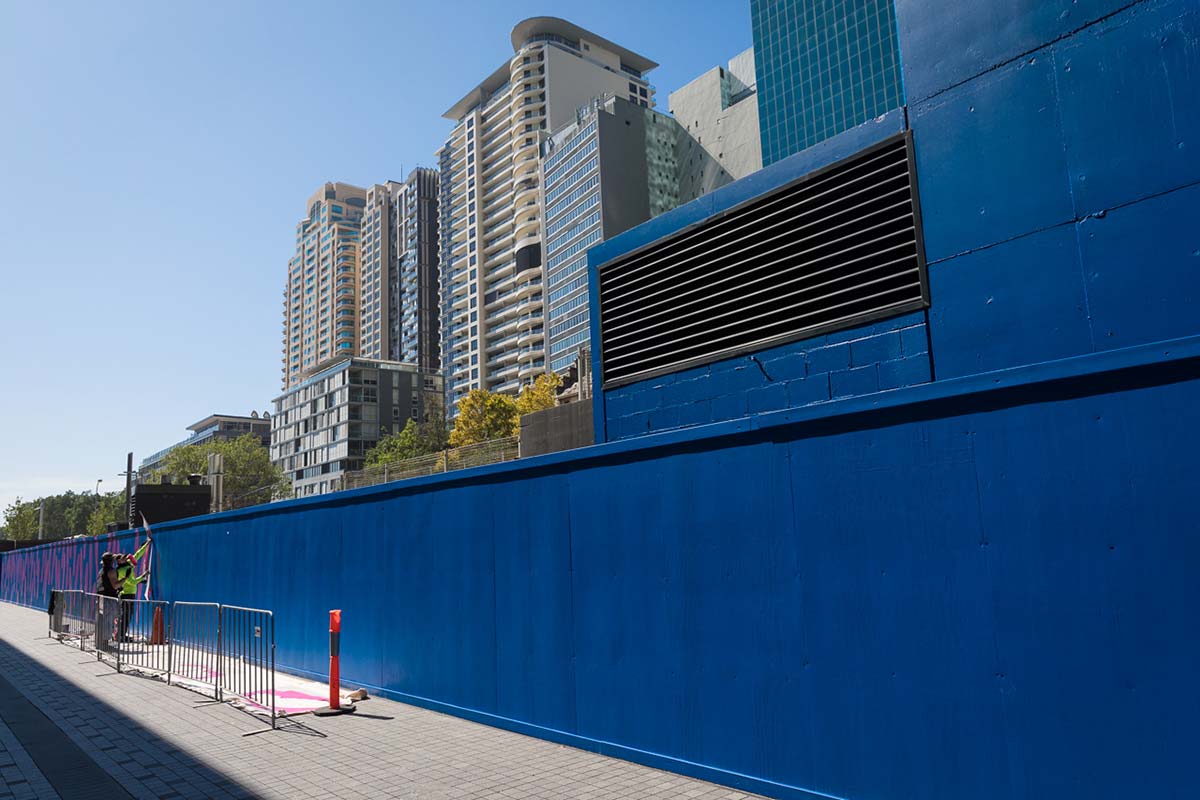 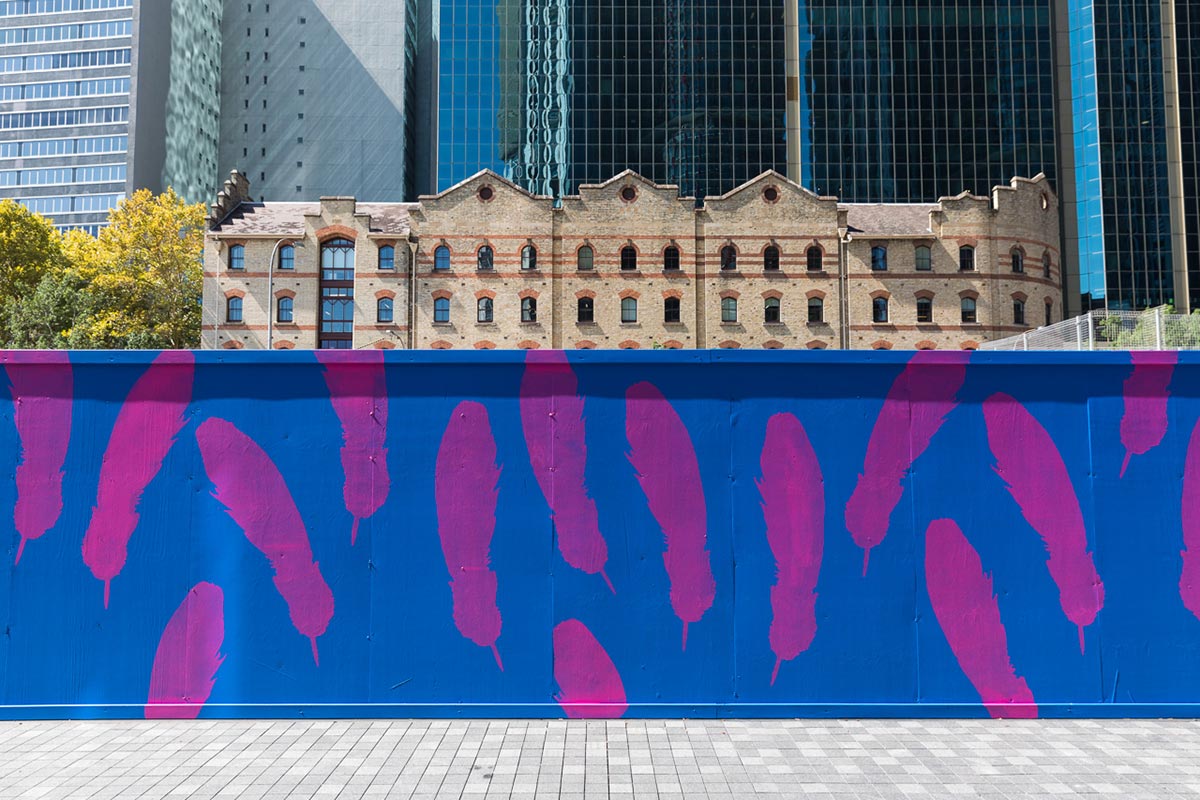 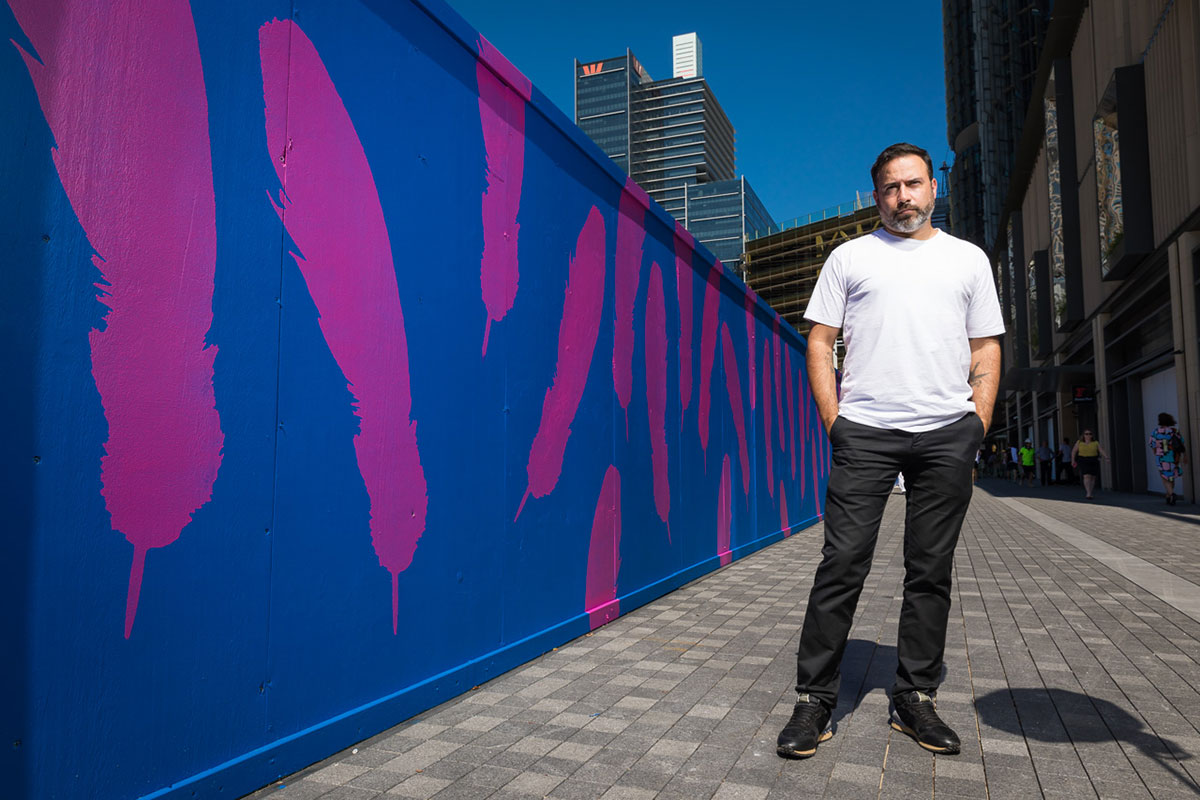 “I come from an urban perspective, an urban environment, that’s where I grew up and really highly saturated, highly pigmented colours represent where I come from in terms of the contemporary environment,” he expounds.

“We, as artists, have this amazing power”

Meanwhile, the “crow does have a lot of significance for Indigenous communities and it’s a very symbolic and esoteric figure in many cultures around Australia,” he notes. The feathers cascading down the wall seem to be “drifting down from the sky and have found a resting place here.” They also provide a sense of movement, highlighting Barangaroo’s human traffic and history as a meeting place.

Looking up once again at the falling feathers, buffered by crowds milling around him going about their daily lives, Rennie admits: “I’m really proud.”

“A lot of people talk about this renaissance at the moment with Aboriginal art,” he says. “It’s not to say everything is rosy and great in this country, it’s far from that. But we, as artists, have this amazing power.”

As The Crow Flies by Reko Rennie opens at Barangaroo in October 2017 and was commissioned by Lendlease under the Barangaroo Public Art and Cultural Plan. Photography by David Varga.