Wynyard’s historic wooden escalators were removed this year. Now they have a second lease of life – as a sculpture by artist Chris Fox

First installed in 1931, the historic wooden escalators at Wynyard station have served Sydney’s commuters for over eight decades. This year they were removed. Now the iconic timber-structure has been reborn – as a sculpture.

Interloop, by artist Chris Fox, hangs from the station ceiling, hovering above the escalators that travel underground from York Street. The vast twisting accordion-shaped sculpture is more than fifty metres in length, weighs over five tonnes, and weaves in 244 wooden treads and four combs from the original escalators. Whilst paying homage to the past, it also, simultaneously, signifies the future.

As Interloop is unveiled this December – and commuters once again start to engage with Wynyard’s historic escalators, this time not below their feet but above their heads – Sydney-sider Fox, 42, explains the inspiration behind his latest major work. 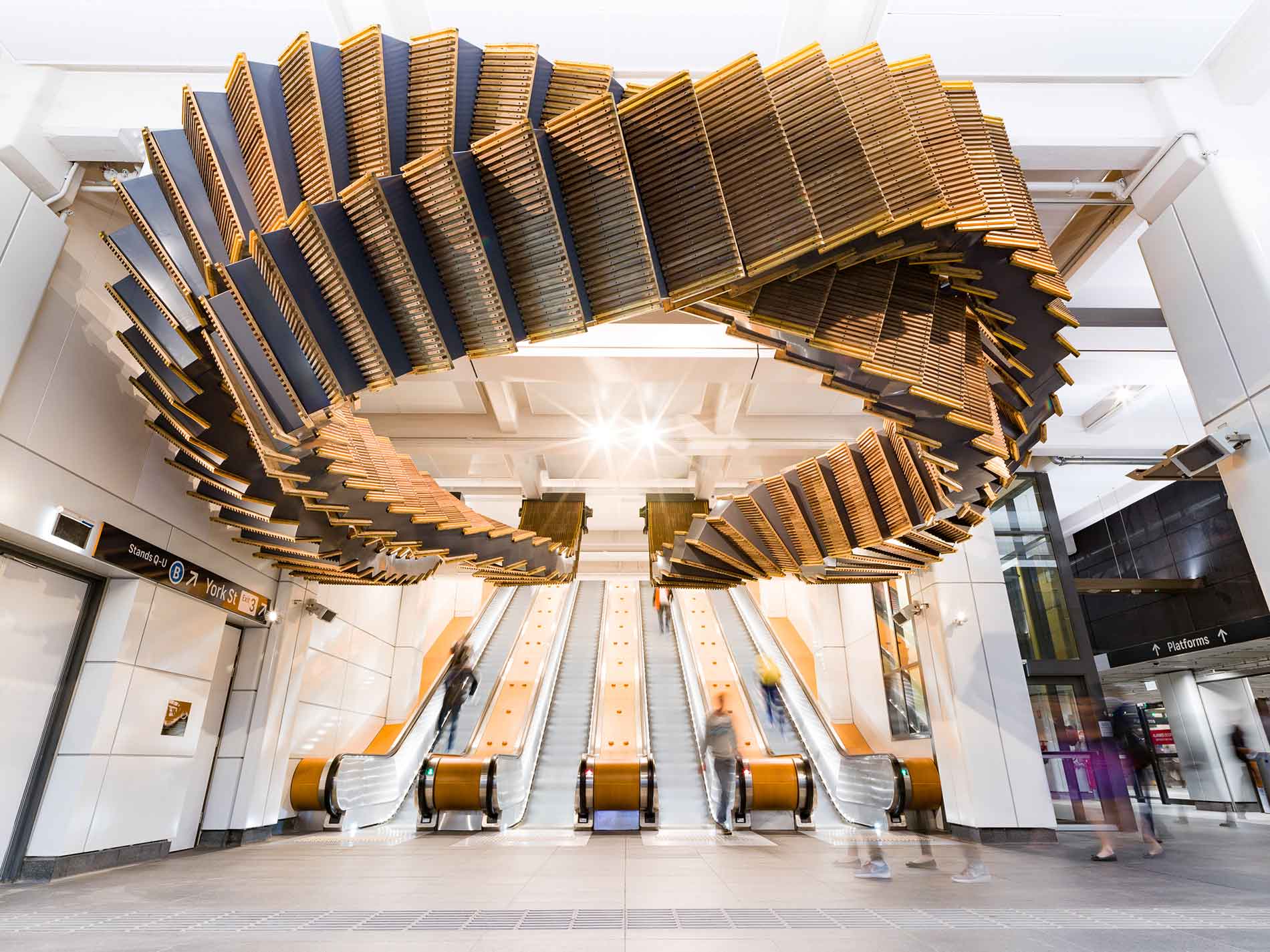 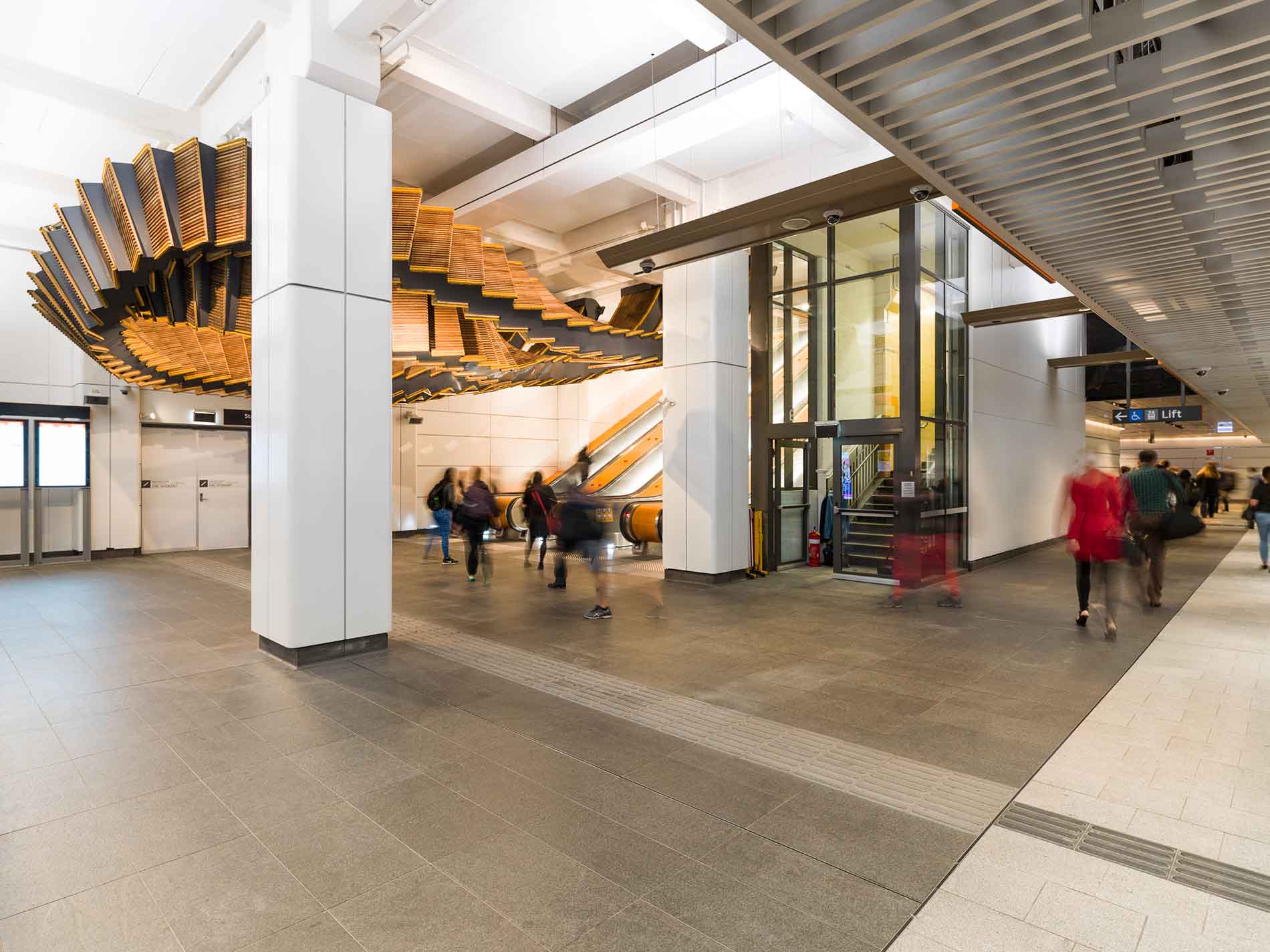 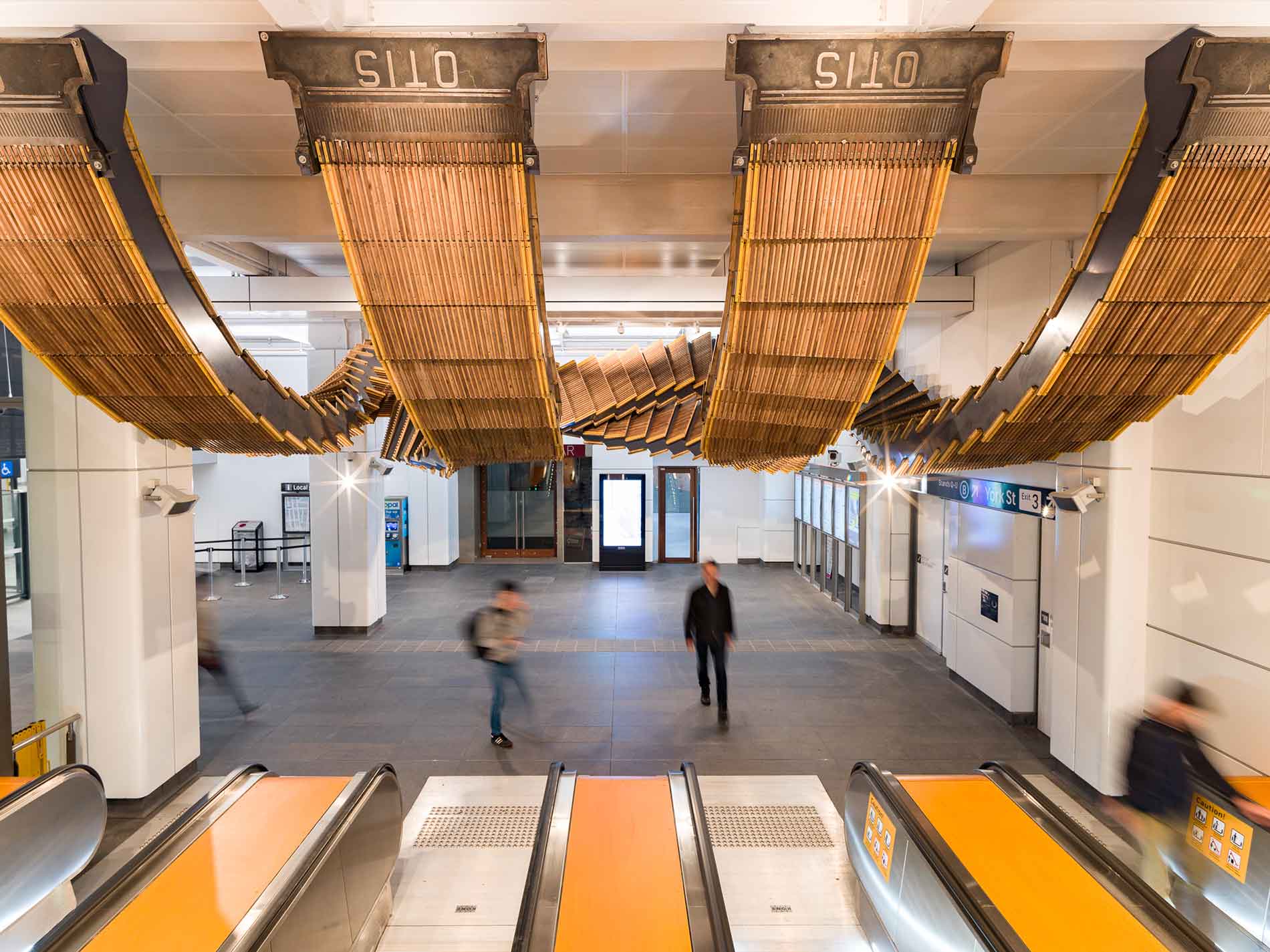 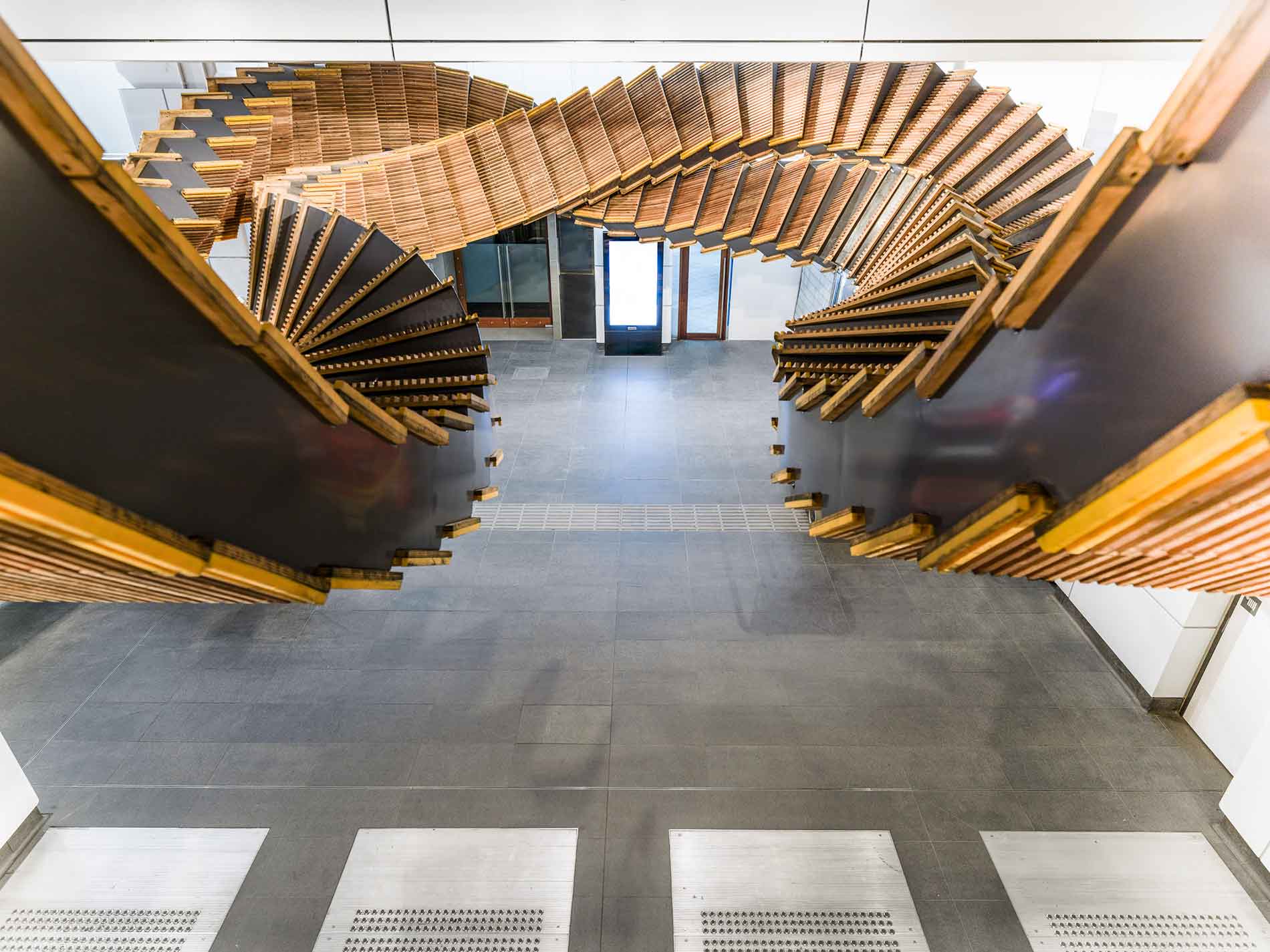 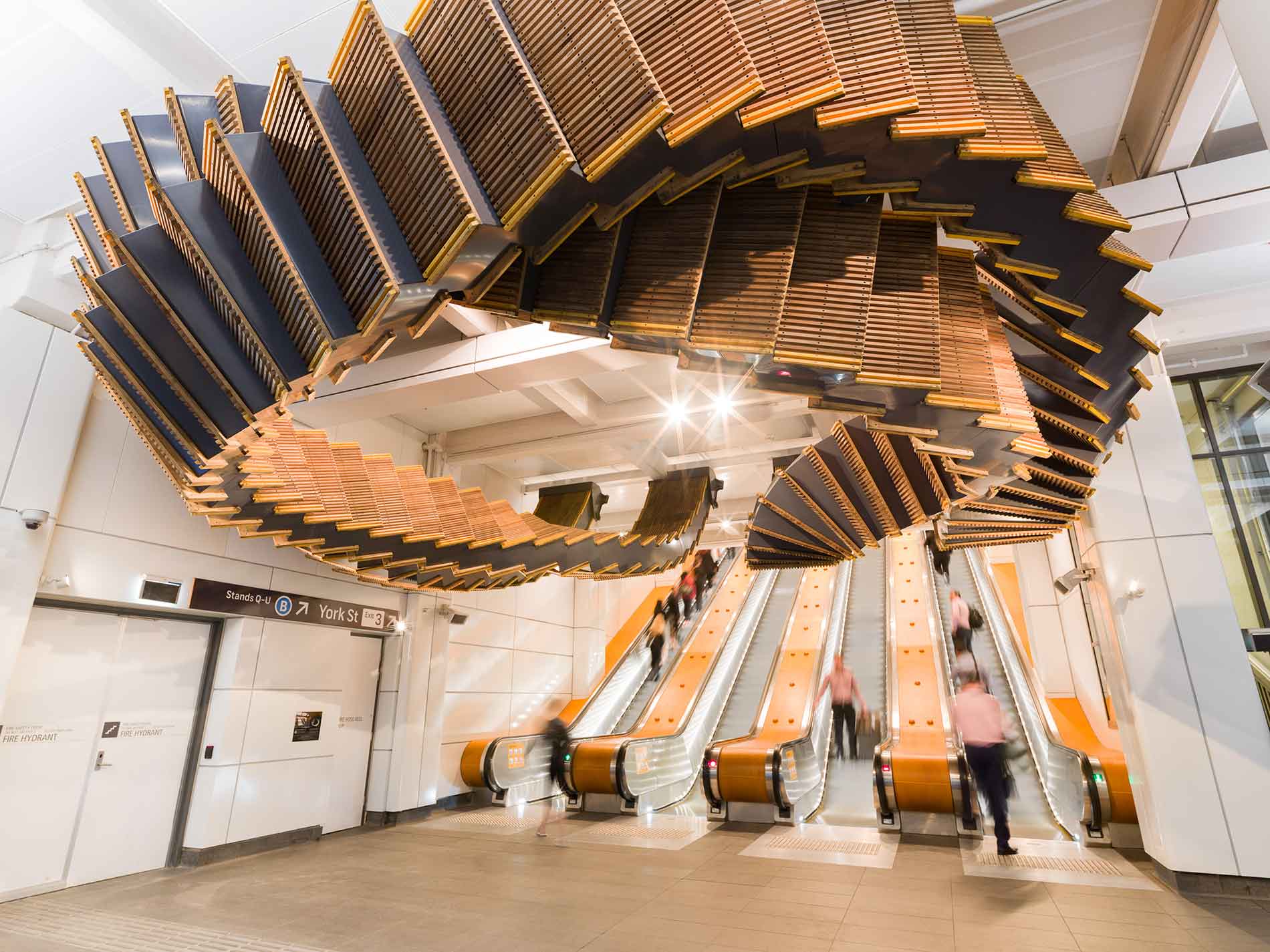 What exactly is Interloop?

Interloop reconfigures the heritage escalators in a stitched form, suspended between two ends of the building. The project signifies the past and future journeys that have occurred at this site.

You studied both visual arts and architecture at university and recently completed a master of fine arts. You also teach a course that combines architecture and art at Sydney University as a senior lecturer. How does your training in both disciplines influence your work?

The combination of the two is something I use in my large-scale sculptural practice. The visual arts process of exploratory conceptual thinking is at the forefront of my practice. The architectural skill set I have is used to then facilitate that process: to make the sculptures ready for fabrication, to negotiate with stakeholders and institutions. My architectural training has given me an understanding of structural engineering, visualisation and analytical design process. With large scale public sculpture there’s a lot at stake. Interloop, in particular, has a really nice marriage of the two skills: the stairs have a very architectural component but the way I have manipulated the form and the steps is sculptural and artistic.

“With large scale public sculpture there’s a lot at stake”

You have had major public commissions and exhibitions in cities across Australia, the US and Europe. What is a common theme in your artwork?

I’ve always been interested in scale and site. Namely, in manipulating sites with large-scale interventions, using ordinary materials [like cars and cables] in a way that creates an uncanny understanding of place.

Specifically, what inspiration is behind Interloop?

The old escalators had been there for over eighty years and before they were removed they held this sense of time and journeys, of time and travel. Interloop resembles, in part, the original escalators but something else is occurring, too: there’s this otherworldly space that occurs above people’s heads. Also, I wanted to explore the idea that people are stationary on an escalator whilst also travelling. The escalator allows for a moment of pause that occurs mid-motion. I wanted the sculpture to resonate with people in this state, to reference all those journeys that have passed and are now interlooping back.

What has been the largest challenge?

At the point when we were just about to start fabrication in August a strict timeframe for installation was decided with a 48-hour installation over one weekend, rather than over a couple of weeks, as we initially thought. We had to go back to the drawing board and rethink completely how we were doing this project: key was having pre-assembled parts that would bolt together efficiently on site. 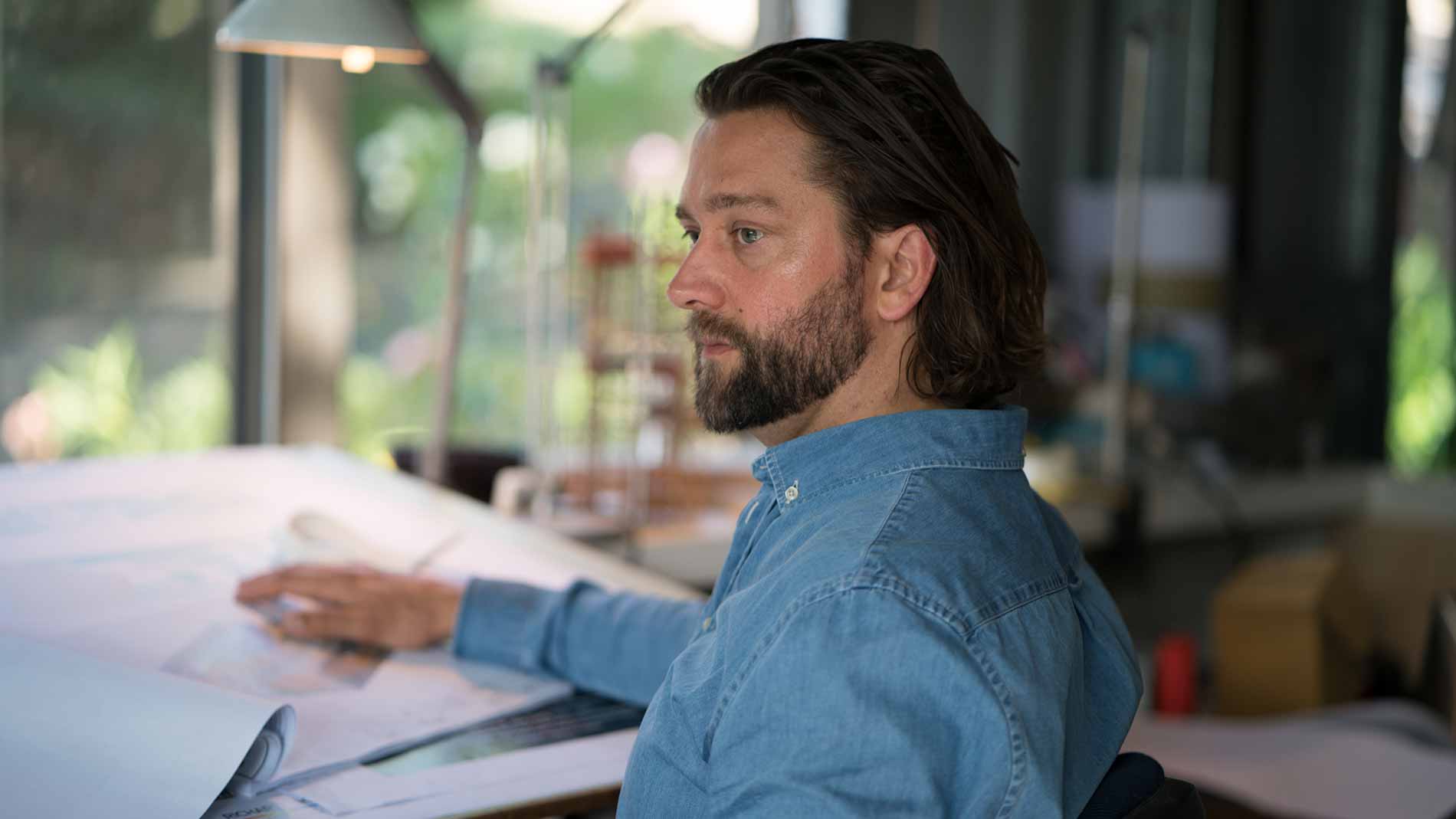 The final sculpture is built from high-strength marine grade aluminium with wooden treads, which have been pre-assembled, attached to the surface. Where did fabrication occur?

In Brisbane: Lumark are high-end marine fabricators. They are able to work with aluminum in a very fluid way, negotiating a very complicated project under intense time pressure.

What does Interloop mean to you as someone born-and-bred in Sydney?

I’ve built a lot of projects in other cities and overseas; but to do something in such a key location in my own city is deeply exciting. It’s a beast of a thing so it will be hard to miss.

“It’s about pulling people out of their everyday”

And what does it mean for Sydney?

It’s very exciting for Transport for NSW to commission such a large-scale sculptural project. Without ambitious visual arts projects as part of our urban infrastructure we can’t really say that Sydney is a world class city. It’s an important part of creating an identity for the city and enriching the experience of Sydney.

Finally, what legacy do you hope Interloop will have?

To allow people to pause and think of something other that is occurring above them: for the public to know that there have been other journeys and other stories that have occurred in this important location. I think, if anything, it’s about pulling people out of their everyday.

Interloop, a public art installation by Chris Fox commissioned by Transport for NSW, opens at Wynyard Station in Sydney on December 4 2017.