The new mural, integrated into a new building designed by acclaimed architect Angelo Candalepas, is the largest public artwork by an Australian artist in the Sydney CBD

Maria Fernanda Cardoso is fascinated by the microscopic. The miniature. The details that exist on the “edge of the visible”, barely apparent to the naked eye. She has just spent six years on an artwork that spans the length of a building, but her curiosity remains the same.

“In a public space, scale is very important, because most things go unperceived. The scale makes them visible,” says Cardoso.

This attention to detail is the key to understanding Cardoso’s latest creation, Ripples and Droplets, a swirling, ambitious public artwork on the side of a new 36-storey residential tower in the Sydney CBD. Cardoso’s mural, which stands eleven stories high and covers 335 square metres, is believed to be the largest public artwork by an Australian artist in the Sydney CBD.

Ripples and Droplets was commissioned by United Development Sydney as part of the Castle Residences mixed development at 116 Bathurst Street by Candalepas Associates. Cardoso has worked closely with the architect, Angelo Candalepas, since the inception of the project in 2014. And while the brief has evolved over that time, the result is consistent with many of the themes that have occupied her thoughts for decades. 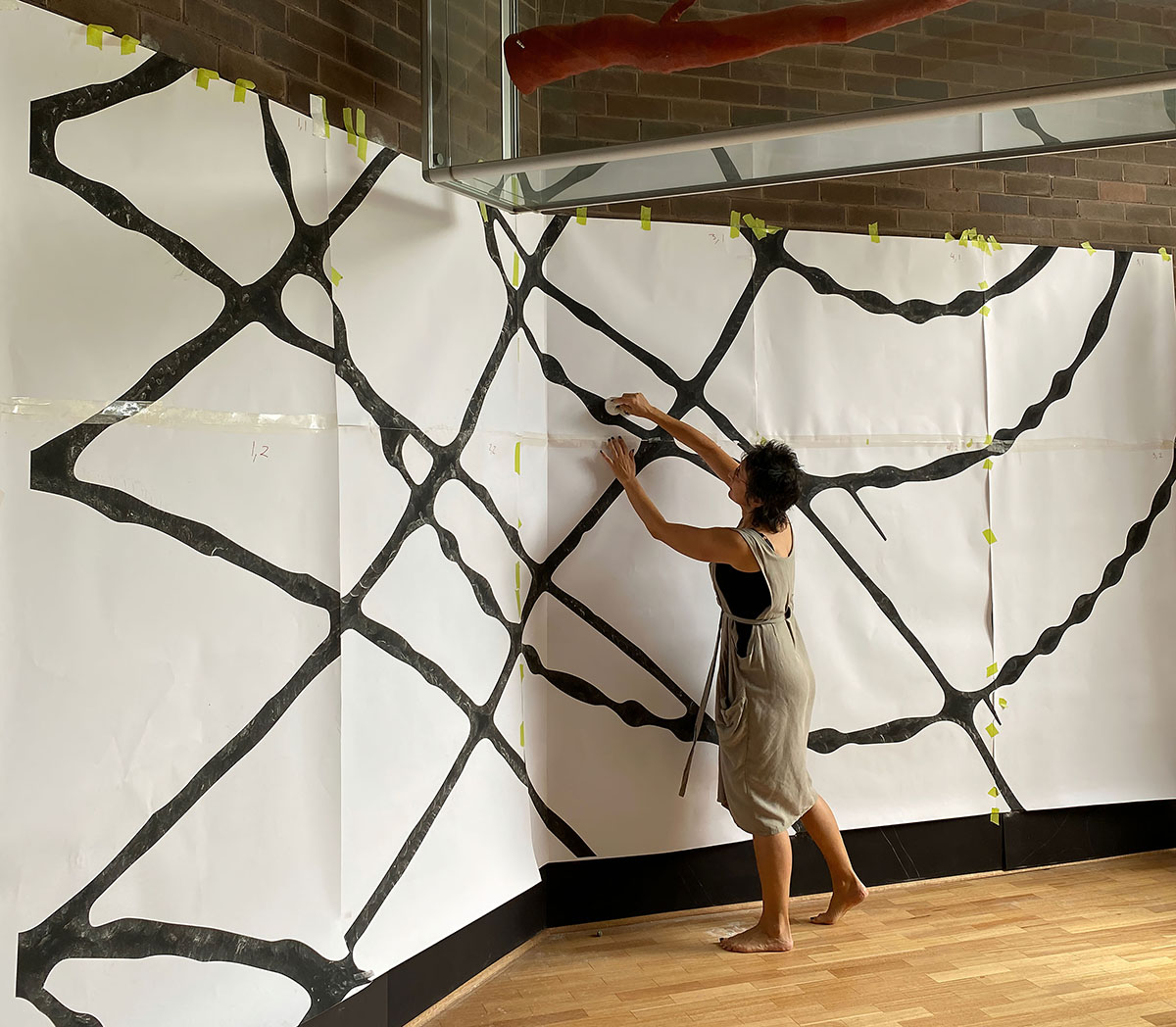 Cardoso grew up in Colombia surrounded by architecture and design. The daughter of two architects, she spent eighteen months studying architecture herself before switching to art.

“All that architectural training—the technical drawing, working with scale—that’s what architects do. You draw and you magnify. My mother was designing next to me using scales and rulers, and I learned all that as a child. So this commission, it was just so natural,” recalls Cardoso.

Cardoso left Colombia at the age of 24 to study in the United States, including a Master’s degree in sculpture at Yale. Her career took off: one of her best-known works, The Cardoso Flea Circus, toured the world before ending up in the collection of Tate Modern. She was commissioned by the Museum of Modern Art in New York to create an installation of 36,0000 plastic lilies. In 2003, she represented Colombia at the Venice Biennale, later chosen by the Serpentine’s director, Hans Ulrich Obrist, to feature in a book about that country’s art.

But while her outlook is global, Cardoso has drawn particular inspiration from the wonders of her adopted home. She moved to Australia in 1997 and became a citizen six years later, settling close to the coast in south-eastern Sydney. In 2003, the Museum of Contemporary Art presented her solo survey exhibition, Zoomorphia and in 2012, she unveiled The Museum of Copulatory Organs on Cockatoo Island as part of the Biennale of Sydney.

Cardoso’s new public artwork in Sydney, Ripples and Droplets, will not only be seen laterally, from across the street, but also from below. It’s a dynamic design, partially concealed by the Porter House hotel below, but one that reveals greater depth and nuance from the different vantage points along street level.

The work is part of a series called Drawing Paintings, Painting Drawings. The name refers to the technique Cardoso invented, a “hybrid form” that allows her to draw and paint simultaneously. Instead of a brush, she works with a container that dispenses paint through a small plastic tube and needle. This creates droplet effects as she draws lines across the surface. “I’m using this as a loaded brush,” she says, “so you can keep going without running out of paint.”

“My concept from the beginning was about painting as a fluid. That’s why it ended up being ripples and droplets. The patterns, they’re like ripples in water, and if you look closer, there are droplets.”

The design—concentric circles and spirals like ripples on a pond, also the silky thread of a spider web—reflects the artist’s fascination with the natural geometry of the world and her relationship to it. She notes: “The droplets are magnetic forces with surface tension, the rings are waves and the ripples are all about fluid dynamics. The circles and spirals also reflect the natural fluid movement of the body, my arm in particular, that swings freely like a pendulum as I paint and draw.”

Cardoso worked through many options before deciding which colours and paint to use. She ended up selecting mineral silica paints that will adhere chemically to the concrete, a material that is unlikely to bubble, peel or fade over the years. 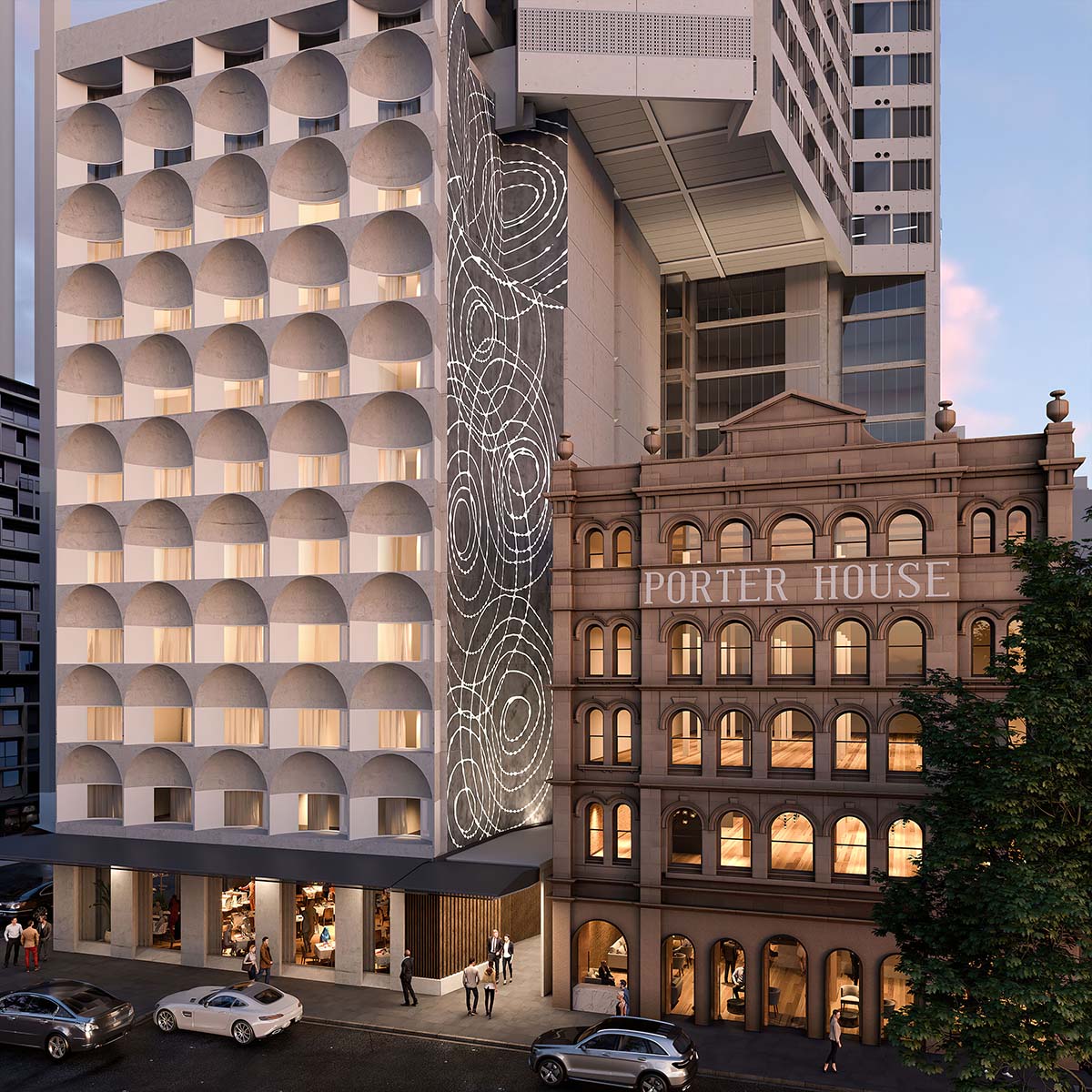 The result, according to project’s public art curator Amanda Sharrad, is a distinctive, exceptional landmark and Cardoso’s most ambitiously scaled work yet.

“The best public art happens when artists propose work aligned with their own creative practice that also engages with space in a creative and unpredictable way, and Maria Fernanda has responded with intelligence and originality to the site.  Highly integrated artworks like this are successful when there’s a supportive commissioning framework and strong relationship between art and architecture, but when each maintains its distinct identity and integrity.”

“Cardoso delights in finding, revealing and celebrating beauty and magnificence in small and seemingly insignificant forms and forces of nature,” Sharrad says. “The biophilic design of this work calls to mind natural phenomena such as rain on a web, ripples on water, growth rings of a tree—meticulously enlarged to the scale of the built environment. Changing fluidly according to one’s vantage point, drawing the eye in from the street and upwards from below, the fine white organic lines contrast beautifully with the surrounding architectural order and urban colour, giving the artwork a quietly powerful presence.”

Ripples and Droplets is a public art installation by Maria Fernanda Cardoso, commissioned by United Development Sydney as part of the Castle Residences mixed development at 116 Bathurst Street by Candalepas Associates.

All images provided Courtesy of the Artist.