Wild is The Wind, an exhibition of new sculptural works by Lambie, draws upon music and pop culture references from Glasgow to Sydney. 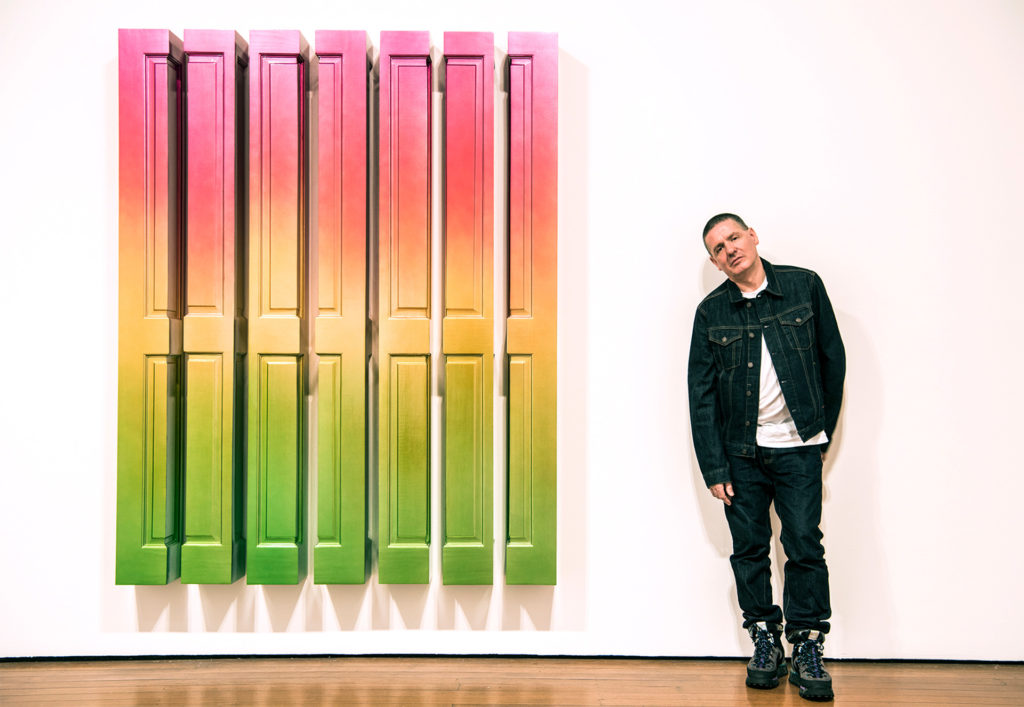 Jim Lambie’s new exhibition at Roslyn Oxley9 Gallery sets up a dreamscape with found objects that feeds into an Andy Warhol aesthetic, fit for the New York City factory that once was.

The Scottish artist unites Sydney and Glasgow in pop-culture motifs; exploring a universal language in Wild is The Wind. One that is often accredited to a music background — a former DJ, and psychedelic music in his veins from a mobile disco owner father and go-go dancing mother. While all the titles of the works come from music lyrics — they reach beyond these connotations; instead, adding another texture or materiality. “You can be very suggestive,” the artist adds.

“I want people to be able to bring their own story to the works; their own interpretations,” Lambie muses. “If you can start a dialogue, and if art is about anything, it’s about talking to each other.”

Using a music language Wild is the Wind is fundamentally about the times of the day, offering a philosophical perspective of collective experience. Sun Rise (Meadow Lark), 2018, features Glasgow doors chopped up and rearranged as personified columns; spray painted a hyper-real disco sunrise or sunset. Or Nightfall (Diamond Firetail), 2019, spray painted deep purples with blasts of pink and blue, echoing a starry night. “I’m using the door as a metaphor for light coming out, light appearing and disappearing,” Lambie considers.

Ten sunglasses installations also appear as nebula clusters across the gallery walls; retro, cheap sunglass lens, popped out and welded together with artisan stain glass processes in lend came. Titled, Love Woke Me Up This Morning; Morning Glory; or Morning Glow, all 2019, continue the dream-state.

Colour radiates throughout the exhibition; bright orange paint splatters across the wall into a fluidity of thoughts from carrots that are the vehicle for paint. 14 Carrots, 2019 — titled to get the viewer thinking of gold — is complete with green tops Bugs Bunny would eat. Lambie shares it’s an active installation, “it’s a real time-based work because the carrots will disintegrate; it’s really about this one moment, this one gesture.”

In Lambie’s Self Portrait (In Seven Parts), 2019, a seven-monitor video is ever-changing. Randomly looped, the screens play the artist spray painting the camera in different colours that feed into the theme of endlessness, spun off Bill Hicks’ famed quote “watching television is like taking black spray paint to your third eye.” Lambie adds, “it’s a wee bit like social media today.” 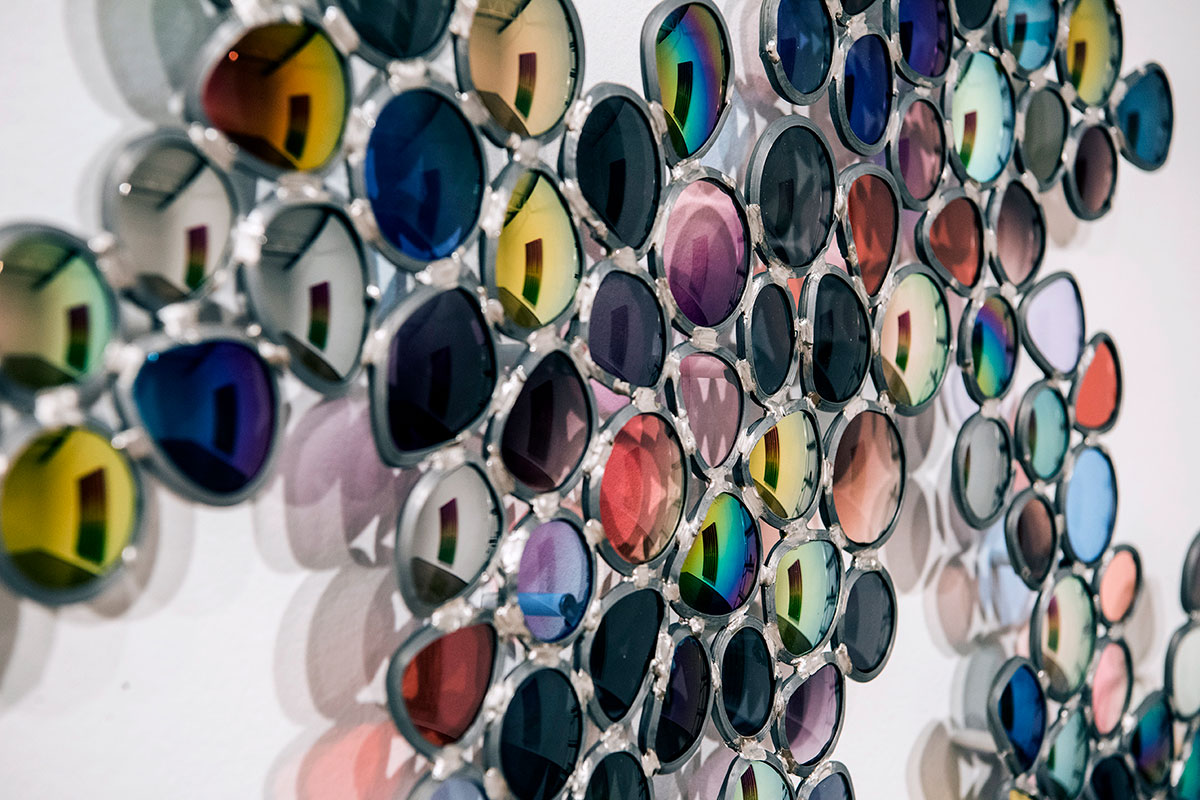 The hero artwork of the show, Sleeper (Wild Is The Wind), 2019, sees Lambie bring in a Glasgow sleeper beam, raised just at pillow height, appearing to be held up by a string of beads (collected from Sydney’s thrift shops). “The sleepers bring with them this element of deep sleep, the old ones look really beautiful,” Lambie discloses. “It turns the whole space into a dreamscape; a REM moment.” This surrealist moment continues into Sun Beam, 2019. With t-shirts stuffed into glass jars stuck up onto a raw, exposed beam in the gallery, representing the body, where the artist reflects on “floating bodies” that rise like the sun.

Like a dream, the exhibition is about a thought, a moment, and Lambie asks how to measure that? How do you control the fleeting, passing ideas? The metaphor of art attempts to answer these questions in Wild is the Wind in a poetic gesture to temporality. 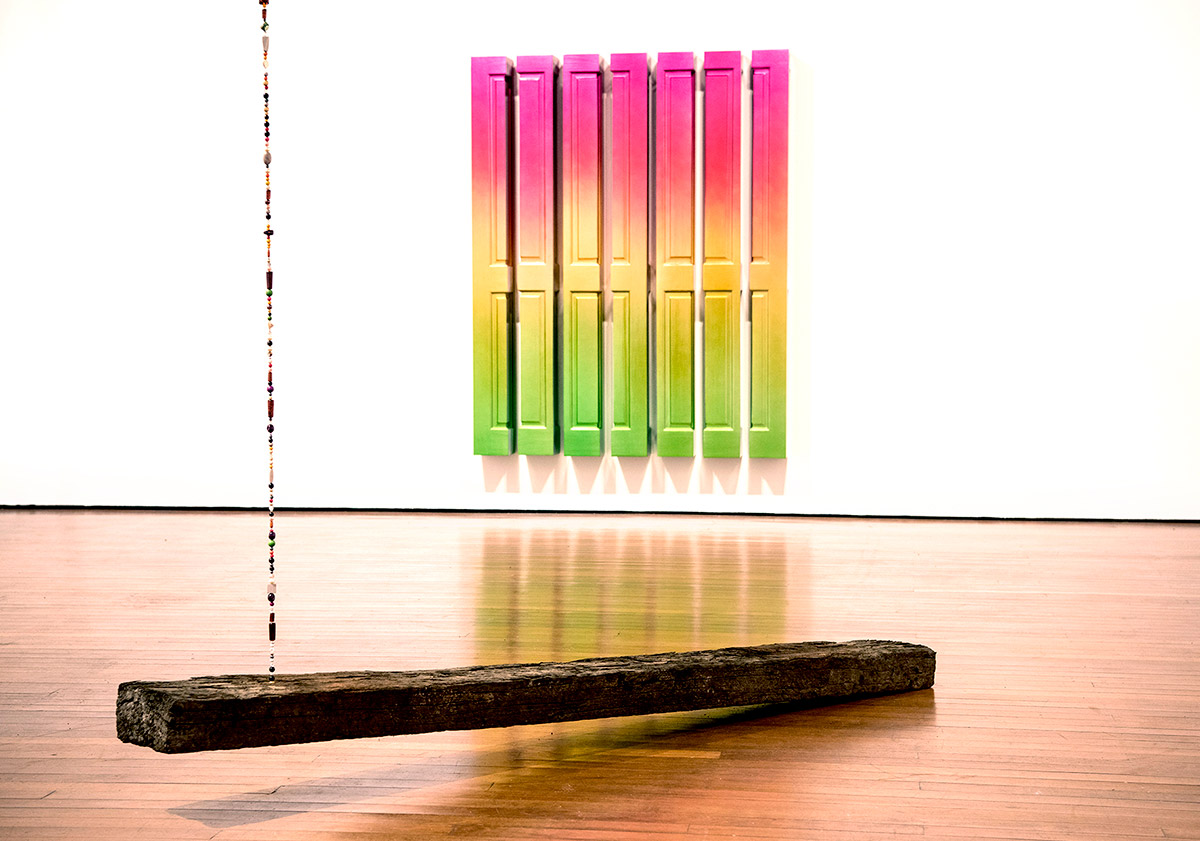 Jim Lambie – Wild Is The Wind