The Last Resort: a conversation with Anri Sala 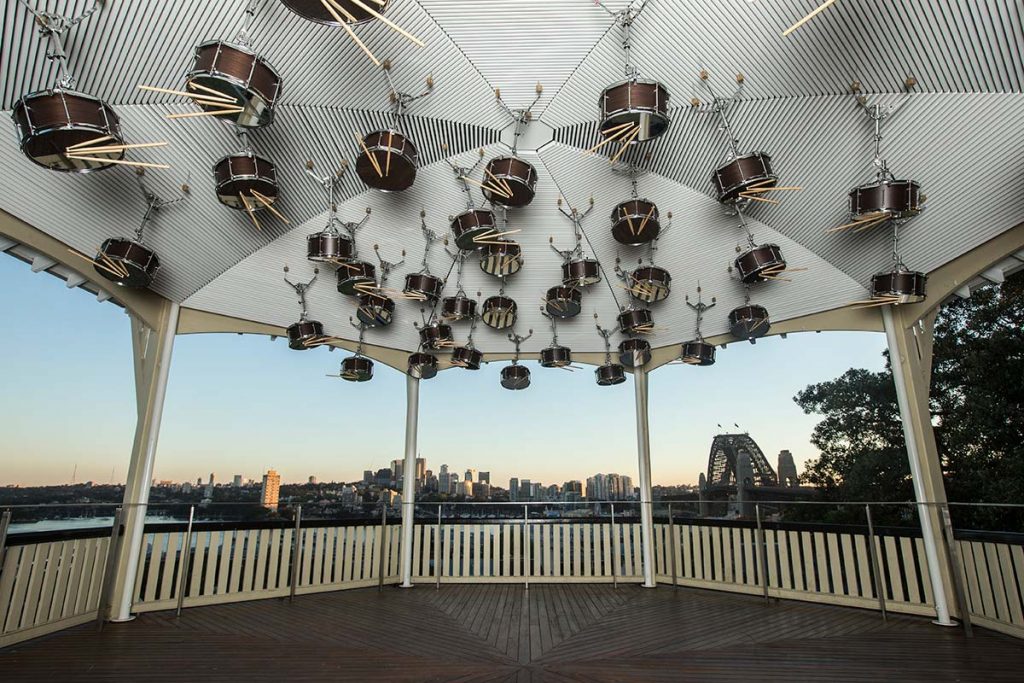 Stand atop Observatory Hill – Sydney’s highest natural viewpoint – this month and you will hear the sound of Mozart’s Clarinet Concerto in A Major. Then it stops abruptly. After a moment of silence drumming begins signalling an arrival, perhaps, or heightened anticipation. This is not Mozart’s concerto as it was originally written, however. It is a recomposition. And overlaying its score an ensemble of drums play by themselves, with no help from a human hand, to the sound of their own beat.

The Last Resort is a new sculpture and sound installation by acclaimed French-Albanian artist and filmmaker Anri Sala, commissioned specifically for the site by Kaldor Public Art Projects. No less than thirty-eight mechanised snare drums hang suspended from the ceiling of the timber rotunda, a bandstand built in 1912 with views to the harbour. Together the concerto and drum ensemble convey a windswept variation on Mozart’s Enlightenment era concerto – written three years after the First Fleet sailed into Sydney Cove – in Sala’s words “as if it had floated and drifted like a message in a bottle before being washed ashore after a long voyage.”

“You feel how time interrupts and bends the concerto”

Sala grew up in communist Albania, spent many years in France, but now lives and works in Berlin. One of Europe’s most acclaimed artists, his work has appeared everywhere from London’s Tate Modern and Serpentine Gallery to Manhattan’s New Museum and in 2013 Sala represented France in the Venice Biennale. The Last Resort is the first time he has made a major new artwork in Australia and is the artist’s most ambitious public project to date. 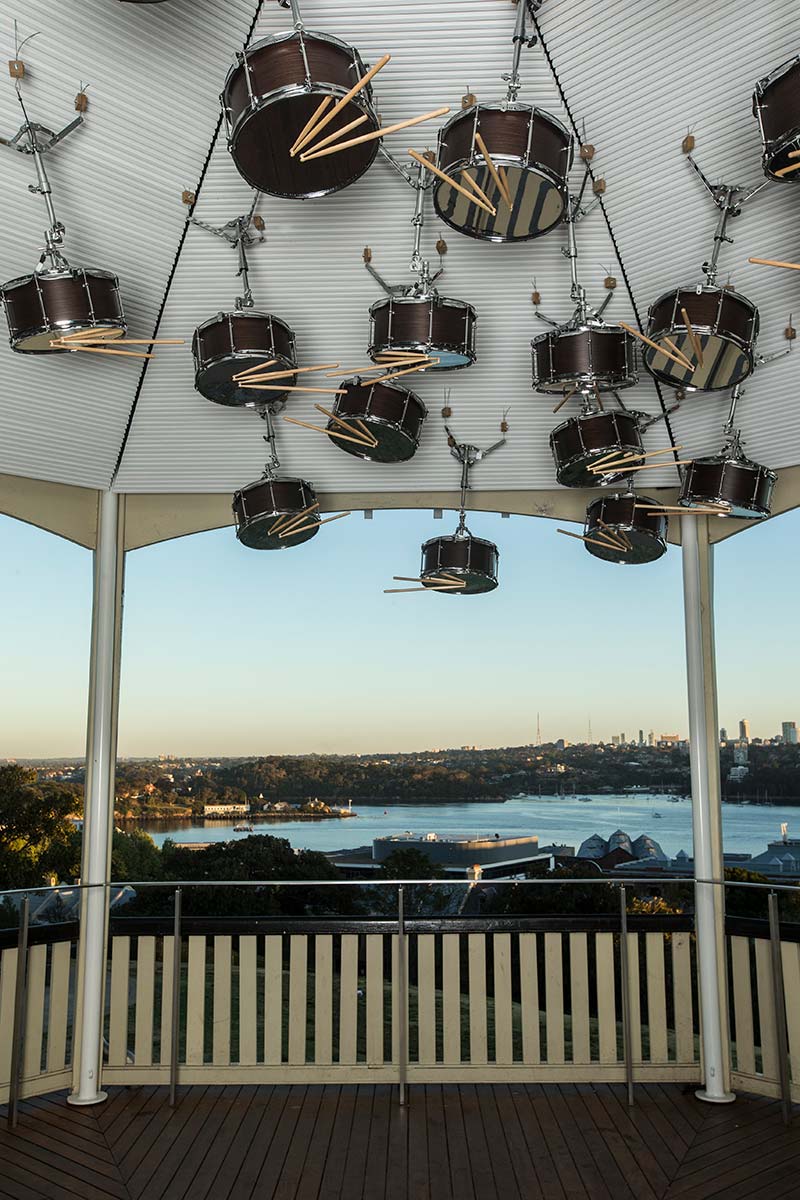 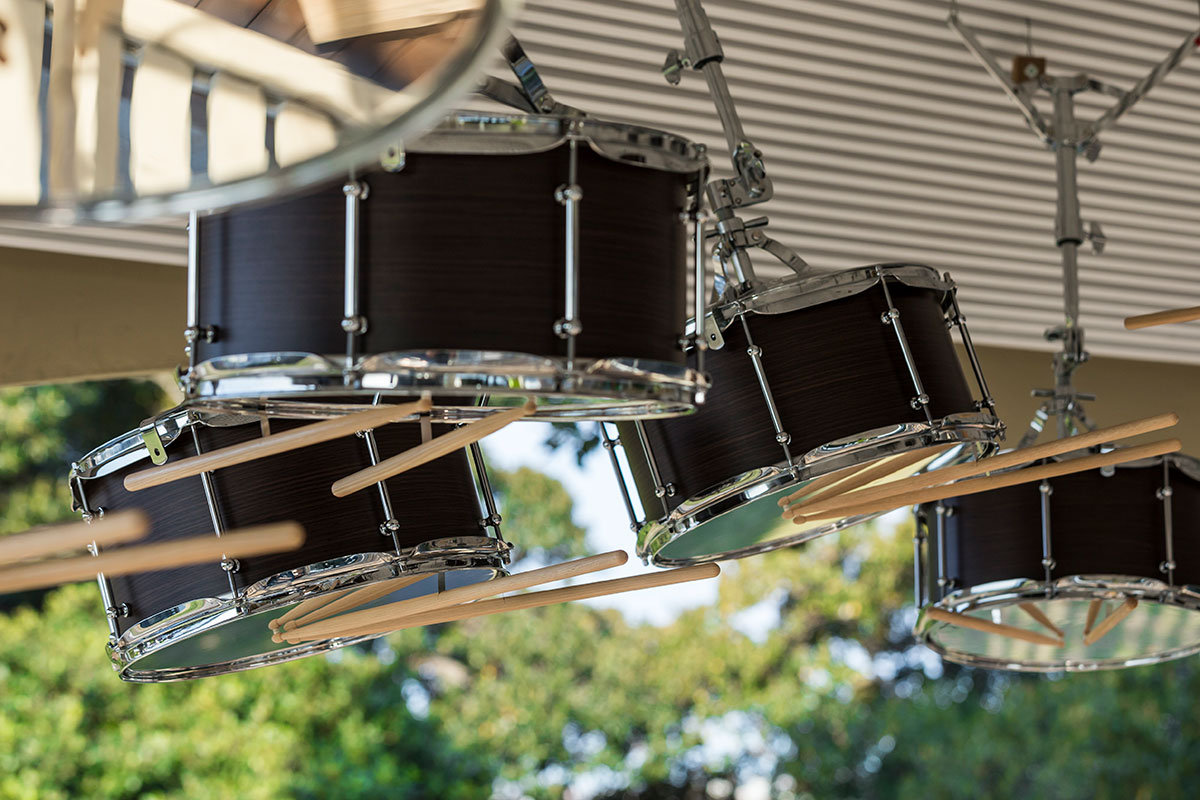 This world-premiere artwork is placed alongside the Sydney Observatory, where British settlers first measured the stars. Why reimagine and rework such a well-known piece of music, Mozart’s Clarinet Concerto in A Major, K.22, in this historical setting?

This music is like an object that carries with it the qualities of its own time…. Mozart’s Clarinet Concerto has embedded relations and tensions very telling of the time it was produced.

Are you looking forward or back with this work?

My interest is to approach the music as like an object as it travels and changes over time, creating new meanings into its future… This concerto [written in 1791] was contemporary to the arrival of the First Fleet in Australia and it is also one of the masterpieces of what you can call the ‘golden age’ of the European Enlightenment. I’m interested in this complicated relationship between the Enlightenment and the new ideals that arose with it. How this period gave rise to ideas such as toleration while at the same time drove colonialism and the brutalities it inflicted onto other cultures and civilisations.

I was interested in this idea of how an artwork travels, in the same way as how certain ideals or ideas travel… In any shift in the tempo [in The Last Resort], you feel it, you feel how time interrupts and bends the concerto.

There is also the influence of the winds from the diary of sailor James Bell, who travelled from London to Adelaide in 1838. You used weather patterns in Bell’s diary to re-work the pacing of the second movement in Mozart’s concerto…

As the passage of Bell’s ship was driven by trade winds, weather and waves, this is forefront in his diary. The very first sentence of every entry was about the wind – from strong breezes to hurricanes and storms… It’s interesting to put this individual power of the will of the composer against the force of the weather en-route to a new location.

Why show it in the rotunda?

It was this idea of framing a perspective or viewpoint, this very western approach to the idea of the gaze. Positioned on Observatory Hill, this significant site that looks out to sea and frames this place in relation to the world beyond it. 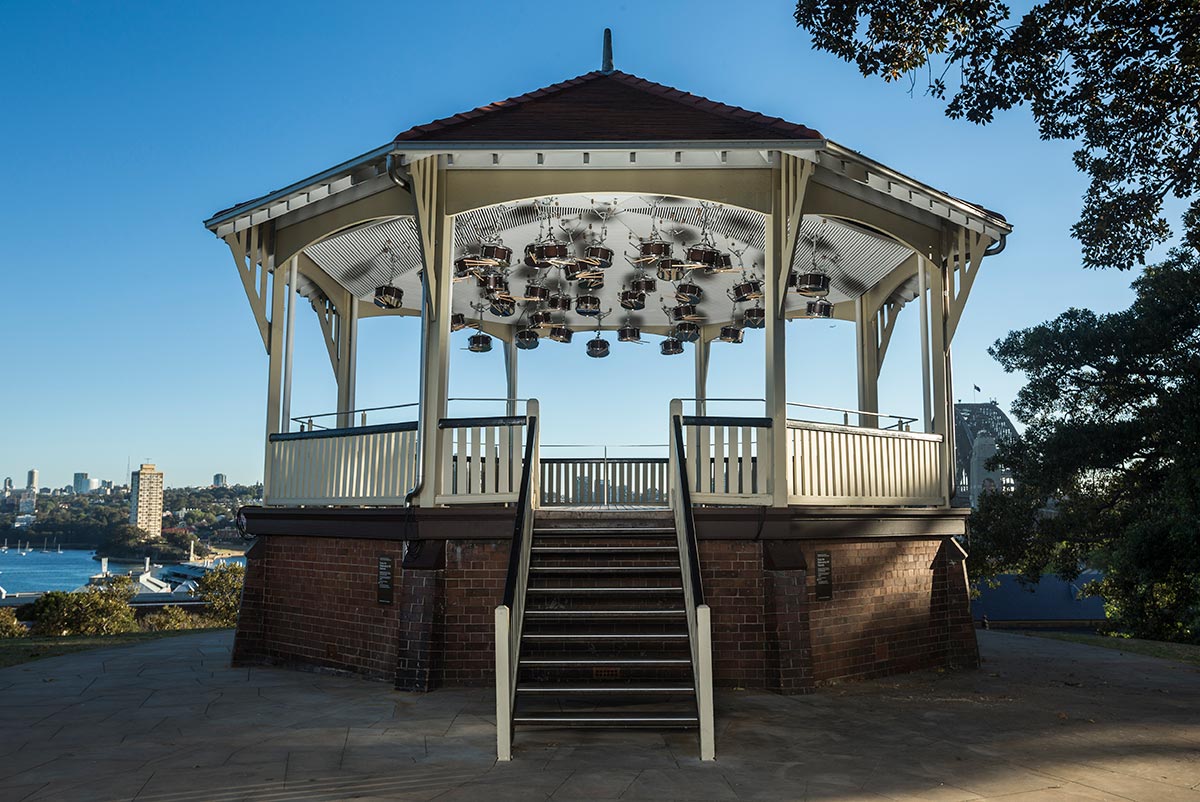 Drums have been an element in your artwork for the past decade. What attracts you to the drum?

Drums are a visual speaker: they have a very visual choreography – you don’t only hear what they play but also see it. If you could only see, but not hear, someone playing the drums, you could imagine what the beat is, whereas if they are playing the violin, you could never imagine what the tune might be. This idea of drums as visual speakers has evolved over time in my work and, in the case of The Last Resort, I was interested in producing this orchestra of drums… When you think of an orchestra of drums you think of military processions, military pieces of music – especially in a colonial setting, every army would have its own drumming orchestra. Here I was interested in inverting the orchestra, presenting it upside-down – not only as a metaphor for Sydney’s nocturnal wildlife of bats but also to create an opportunity to be under an orchestra.

“Drums are a visual speaker: they have a very visual choreography – you don’t only hear what they play but also see it”

The drums seem to beat autonomously, as if the air itself is playing them. What are the mechanics behind that?

There are two loudspeakers inside each drum – one takes care of the audible part and the other is a low frequency speaker whose vibrations trigger a reaction from the drum’s skin. It’s like the reversing of the normal action of the drum. Normally it’s the drumsticks that play the drum; here it’s the drum playing the drumsticks.

How important are the free public panel discussions provided by Kaldor Public Art Projects to understanding The Last Resort?

If somebody wants to go deeper into some of these ideas they can attend the talks, but there are no requirements, you can appreciate the work simply by experiencing it.